Apple (NASDAQ:AAPL) is an outstanding business that I believe is well-run and should remain profitable for years to come, but for a number of reasons, I believe the potential for gain is low and the risk of a sharp decline is high. Regardless of earnings results this week, if I still owned shares of Apple, I would sell them. I don’t recommend shorting the stock of a company like this for a number of reasons, but there could be interesting options plays available for those with experience.

By now the story of Apple and its founder are the stuff of legend. The company and its products including the iPhone, iPad and Macintosh computer are perhaps the most widely known and admired in the world.

From a fundamental perspective, our inquiry begins with the understanding that a stock represents a share of ownership in the business and not just a line on a chart or a blip on the screen. The first thing to note is that as an extremely profitable business, we can put a high valuation on its assets as well as its earnings.

To get a range of estimates for this year’s earnings, I’m going to start by looking at the recent past. As you can see from the Statement of Operations from Apple’s form 10K: 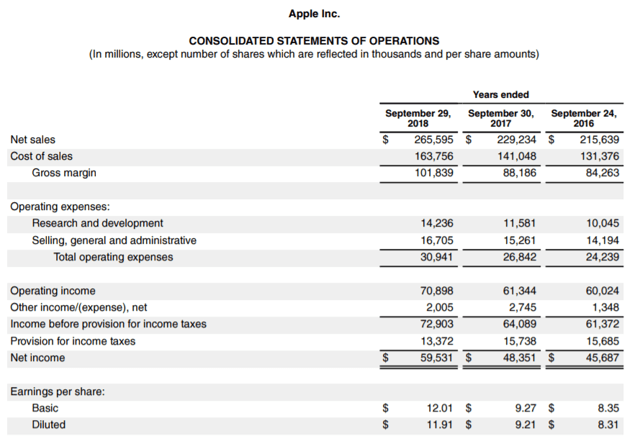 Apple earned $59.5 billion in 2018 after earning $48.3 billion and $45.7 billion in the previous two years. As you can see from the company’s most recent quarterly report: 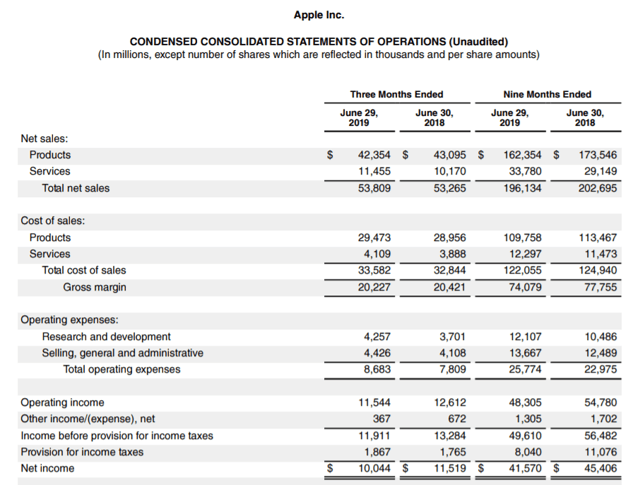 While still extremely profitable, revenue from sales of products decreased from a year ago ($42,354 down from $43,095) while services increased by an even greater total amount ($11,455 up from $10,170). Net income was down more than 10%. In light of this fall, I’m going to start my “back of the envelope” estimate by taking an average of the last two years of profits, i.e., being $53.9 billion, and then just thinking of that as a range of numbers from $50-55 billion.

But the real question isn’t “what did Apple earn last year,” rather “what are they likely to earn this year – and next?” Based on comments from CEO Tim Cook at last quarter’s earnings call such as these:

– “very strong performances for both Mac and iPad and absolutely blowout quarter for Wearables, but we had accelerating growth of well over 50% and a new high watermark for services, where we set an all time revenue record of $11.5 billion”

– “Revenue excluding iPhone was up 17% from last year with growth across all categories. Starting with services, we generated all time record revenue of $11.5 billion that’s up 13% year-over-year and if we exclude the $236 million favorable one-time item from the June quarter last year, services growth was 15% or 18% in constant currency which is consistent with our Q2 performance.”

– “As I mentioned at the outset, it was another sensational quarter for Wearables, with growth accelerating to well over 50%.”

And from CFO Luca Maestri:

– “Customer engagement in our ecosystem continues to grow. The number of transacting accounts on our digital content stores reached a new all time high in the June quarter and the number of paid accounts grew strong double digits compared to last year. We now have over 420 million paid subscriptions across the services on our platforms and we are well on our way to our goal of surpassing the 500 million mark during 2020.”

The growth in services is good news for Apple, and it’s particularly important because while services are growing, iPhone sales are clearly slowing. As explained by analyst Pierre Ferragu in this CNBC clip, iPhone sales are slowing because of increased adoption of the iPhone X. That is to say that the iPhone X was so popular that its consumers rushed out to buy them, and then consumers replace them less often. In the scheme of things, these are wonderful problems to have. So many people bought new phones last year that they won’t buy new ones this year. But what it means in the short term is that 2018’s profits were abnormally high.

Two comments on this explanation from Ferragu. First, a lot of commentary about popular technology stocks revolves around what people react to instinctively or emotionally in terms of which products or companies they think are doing something cool or innovative. I really appreciate that Ferragu’s analysis has some insight not into making claims about what people do or don’t like, but rather how they buy the product. I’ve found his work on Apple to be insightful and useful consistently. Second, as an analyst or publisher of stock research, he has a price target on Apple of $155 per share. I don’t really agree with that statement because for the most part I don’t want to predict what a stock will or won’t do. But it’s worth noting that we can still take advantage of the useful part of his analysis without adopting his conclusion.

So for those reasons, I feel like sticking with the “$50-55 billion in net income” working assumption is a good one.

To my mind, valuations should be talked about as ranges rather than “targets or numbers,” not only because it can help to be accurate and take attention away from being precise, but also because it encourages talking about the kinds of assumptions and operations that went into the valuation. Depending on how optimistic one is about Apple’s prospects beyond the next two or three years, I want to present a few ranges for Apple’s Enterprise Value:

That’s an awfully broad range of valuations, but I just want to be explicit about the parameters of this conversation, especially insofar as it can be a baseline for future conversations.

As of the last quarterly report, Apple had cash and short-term securities on the balance sheet of $99.5 billion and long-term securities of $115 billion vs. short term debt of $13.5 billion and long-term debt of $85 billion, for net cash of $116 billion. A lot of investment theses claim that you can take net cash out of the valuation of a business, and that ends up being a mistake. Either that cash represented working capital or conditions in the business might require future investment, or the business might not be creditworthy without it. I don’t think any of those problems apply here, so I’m willing to call that cash usable, and subtract it from a valuation.

At Friday’s closing price of $246.58 per share and based on last quarter’s share count, Apple had a market cap of $1,110 billion. Taking out our $116 billion of net cash, we see that the market puts Apple’s value at $994 billion. As you can see from the chart above, that’s well above the $880 billion valuation I estimated for earnings on the high-side and an optimistic 16x earnings valuation.

As you can see from the graph below, this is on the very high side of Apple’s relative valuation over the last ten years: 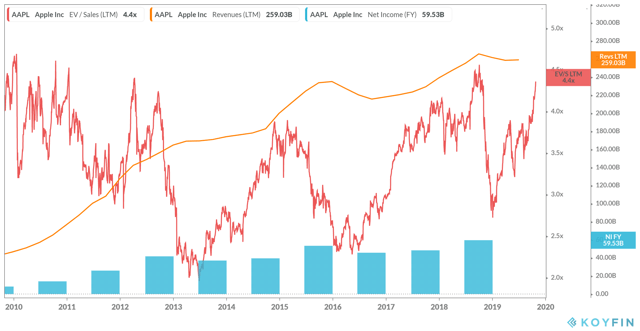 The red line in the graph above shows Enterprise Value/Sales. By comparing the market cap net of excess cash (Enterprise Value) to total sales, we can see one way of the relative degree of optimism the share price reflects. We’re currently at 4.4, and the stock has been there twice before: once a year ago and once in 2013. Since 2013, Apple’s stock price is up well over 200%, but as you can see from the orange line, that period has also seen an almost doubling of revenues (orange line) and net income (blue bars). Moreover, Apple has bought back a significant number of shares since then, which drives Enterprise Value lower and thus pushes ratios down. For those reasons, unless you expect Apple’s revenues to grow significantly, I think last year’s experience is a lot more likely to reflect future prospects.

In an incredible turn of sentiment over the last year, Apple’s stock first fell almost 40% then gained 70%: 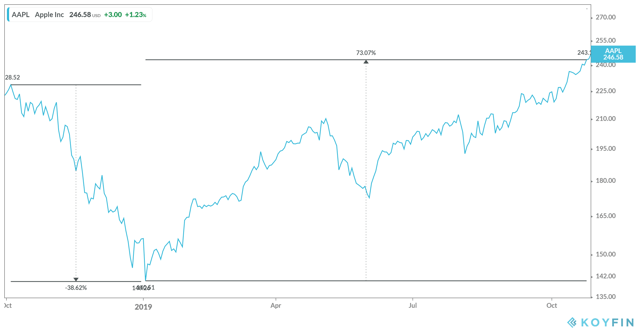 Because of the value of Apple’s large excess cash balance, the change in Enterprise Value of the excess cash, which in January amounted to $215 billion in cash net of $90 million in debt, is $26 per share. Today, we find ourselves right back where we were a year ago.

So the question is why or how could the world’s most broadly followed company with the largest market cap see its share price decline and recover so much in such a short period of time? These 40% declines and 70% recoveries were both much more dramatic than those of the broader market indices. I suspect that the reason is because first of all when the market is falling and traders and investors need liquidity, they sell the most liquid stocks they can find, and that means large caps.

At over $1 trillion in market cap, Apple is one of a handful of the world’s largest stocks. What that means is that not only will it take more capital to get it to go up than almost anything else, in a market decline when people decide they need or want liquidity, there’s more of it to be found there than in almost any other stock.

If I owned Apple stock here, I would sell it. I short lots of stocks, but they’re very different from this one. In a short, I look for some combination of factors that mean the stock is in terminal decline, and hopefully nearing the end of that decline. I’m looking for unserviceable debt and litigation problems like in the case of Mallinckrodt (NYSE:MNK) (see my article here) or shady accounting, product and governance issues at a company like Tesla (NASDAQ:TSLA) (see my article here) or the kinds of structural issues I’ve written about in oilfield services stocks such as Key Energy (NYSE:KEG) (article) and Basic Energy (NYSE:BAS) (article). Apple has the opposite of those problems – it’s a profitable, well-run company in a good business. But that’s a small consolation if the stock falls 25-40% from here in another market decline.

The risk/return from here is too small to continue to hold Apple unless you have an extremely bullish view on the company’s future that isn’t apparent from recent results. I’m not saying it can’t happen, just that I don’t see it.

From this stock price, I’d be very interested in taking advantage of a decline in Apple’s stock price with options. My favorite options positions often come from looking for opportunities with a disproportionately large upside. With these kinds of situations, you can afford to be wrong a number of times because the asymmetric payoffs can more than make up for the losses – as long as you’re consistent and planful. Consider either buying the January 2020 expiration puts with a $200 strike price for around $1.25 or buying a put spread by buying the $210 for around $1.85 and selling the $200. Both of these positions would have enormous upside, and could do well not only if Apple’s upcoming earnings do poorly but also if the broader market declines.

Disclosure: I/we have no positions in any stocks mentioned, but may initiate a short position in AAPL over the next 72 hours. I wrote this article myself, and it expresses my own opinions. I am not receiving compensation for it (other than from Seeking Alpha). I have no business relationship with any company whose stock is mentioned in this article.

Dorian strengthens to hurricane as it threatens Puerto Rico, could hit...

In Atlanta, Trump rallies black supporters ahead of 2020 despite polls...

Police urge residents in Texas town to vacate homes during nearby...