Peloton must start pedaling to the masses so it’s not just spinning wheels.

That’s what brand experts and media analysts say the at-home fitness company that sells exercise bikes and treadmills with subscription-based workouts for upwards of $2,000 must-do if it wants long-term staying power once the company goes public.

“It’s primarily an upper-middle-class product. You pay a few thousand for a bike and the services, but what are the ways they attract a more mass audience?” Chuck Welch, co-founder of strategy consultancy Rupture Studio, who has worked with companies like Nike and Pepsi, told Fox Business. “How are they going to attract people to the brand who may not be able to afford a bike? That might be what they’re trying to figure out next.” 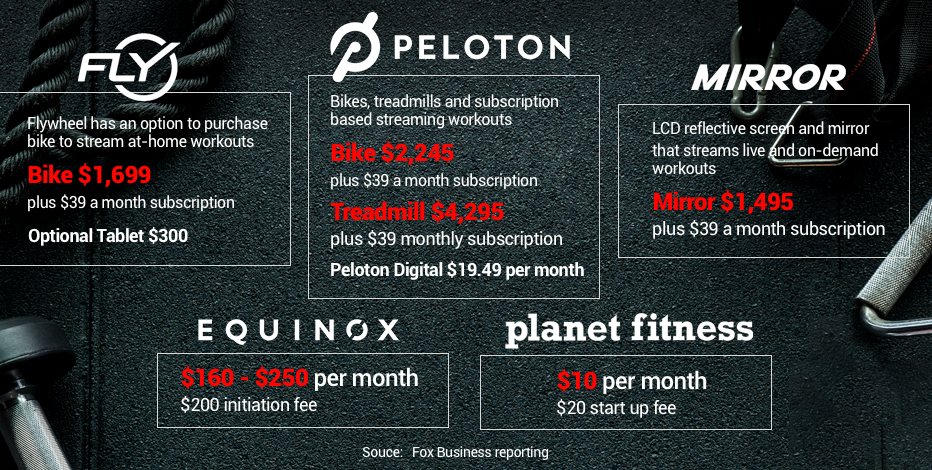 The New York City-based company, founded in 2012 with more than 1.4 million members paying $39 a month on top of equipment costs to live-stream workouts at home, filed for its initial public offering Tuesday. The unprofitable company, however, lost $196 million on sales of $915 million during the 12 months ended June 30, according to its filing with the U.S. Securities and Exchange Commission.

Despite loses, the startup has attracted a cult-like internet following including the star-studded likes of Sofia Vergara, Richard Branson and Jimmy Fallon. Peloton calls itself “the largest interactive fitness platform in the world,” but some have criticized the company for being an overpriced stationary bike with a screen attached, while others have complained about having issues with its speakers.  Peloton did not immediately return a request for comment.

Peloton seems to have high hopes for its future. The filing referred to the startup as “a technology company, a media company, an interactive software company, a product design company, a social connection company, a DTC retail company, an apparel company, and a logistics company.” But media analysts say in order to scale it, it’s going to have to expand outside of fitness, and aggressively take a more lifestyle approach.

“They’re not going to get a mass audience like a Netflix or a Hulu unless they expand their horizons and start doing things that are targeted to the masses beyond fitness,” said Marc Berman, editor-in-chief of Programming Insider, explaining: “It can’t just be upscale fitness items; maybe it’s food targeted to healthy living; maybe travel – expand your horizons, if you’re only one thing you’re completely limiting yourself.”

Sixty-one percent of people spend between $26 and $175 per month on fitness, according to a survey from ASweatLife.com. And last year, 21% of respondents said they were spending money on digital fitness programs, twice as many people compared to 2016, according to the survey, showing growing demand.

And some users have been singing its praises, mostly for being convenient. New Jersey native Devon Bernaiche, 28, quit her $75-month YMCA gym membership because she says she wasn’t able to make it in time between work and being home for her kids. Instead, she shelled out $2,245 for a Peloton bike, plus a $75-a-month for a subscription which includes access to streaming yoga classes for days she doesn’t feel like spinning. She says she lost 50 pounds since she bought it.

“The YMCA for me was too much because, by the time I got off of work and went, it was cutting into my kids’ dinner and sleep time. With Peloton, I can just use it when they are down for bed,” Bernaiche said, adding that having the bike in her home is a giant reminder of how much money she paid for it, so she gym-shames herself into using it.

“I feel more guilty about skipping, and wind up working out,” she said.

For those who don’t want to spend thousands for fitness equipment they might get bored of, Peloton launched a subscription-based app called Peloton Digital last year, which includes live and recorded video and audio workouts like yoga, outdoor running, and strength training for $19.49 per month. To compare, a gym membership at Planet Fitness is $10 a month.

The streaming fitness market is becoming competitive as more gyms and boutique fitness studios sprint at the opportunity to attract an at-home audience. Equinox announced earlier this month it was launching a new stationary bike for its fitness brand SoulCycle with an attached screen and corresponding fitness program. Equinox will also sell its own Woodway treadmill featuring streaming on-demand workouts. Both would directly compete with Peloton.

Welch says Peloton needs to think outside its wheelhouse once it goes public. “Right now the content is primarily aimed at current users. Products like that tend to be seen as luxury items, not necessities. I think they’ll try to be more content-driven, expand retail networks and advertising sponsorships and hire more influencers.”

Some analysts are wary that Peloton won’t be anything beyond a fad.

“Peloton innovated an interactive internet-connected exercise machine. That’s a product, not a business model,” Ted Bauman, a senior research analyst, and economist at Banyan Hill Publishing said, adding: “I wouldn’t touch it with a 10-foot pole.”

The increasingly saturated market may force some companies to lower their price points.

“We’ll see if competitors come in and undercut them [Peloton] on price,” says Welch. “They’re going to have pressure, let’s wait and see.”

How to Help Hurricane Dorian Survivors in the Bahamas – The...

The biggest risk facing the stock market in the coming year...